Chickpeas are a pulse crop, which is a legume plant that has dry, edible seeds in pods. Pulses come in a variety of shapes, sizes, and colours. Chickpeas are also known as ‘garbanzo beans’. 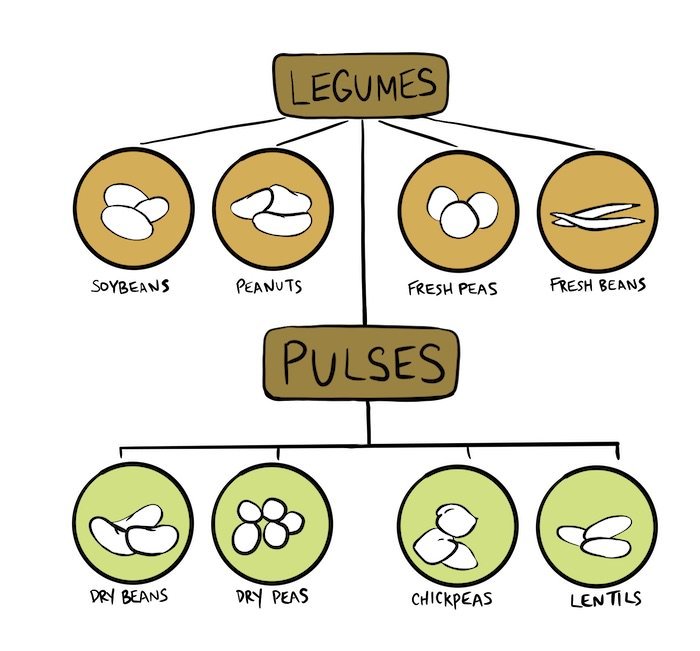 Pulses are legume plants that have dry, edible seeds that are grown in pods.

The top countries for growing chickpeas are India, Canada, Pakistan, Turkey, Ethiopia, and Mexico. Saskatchewan grows over 75% of the chickpeas grown in Canada.

Canada is one of the top chickpea growers.

There are two types of chickpeas grown in Saskatchewan: Kabuli and Desi. Kabuli seeds are large, round, and cream to white in colour. They are typically sold whole, and they make up about 15% of the world’s chickpea production. Desi seed are a bit smaller than Kabuli, with the seed colour varying from green to purple, brown, or black. The Desi plants are shorter and more resistant to disease, frost, and insect damage than the Kabuli plant. 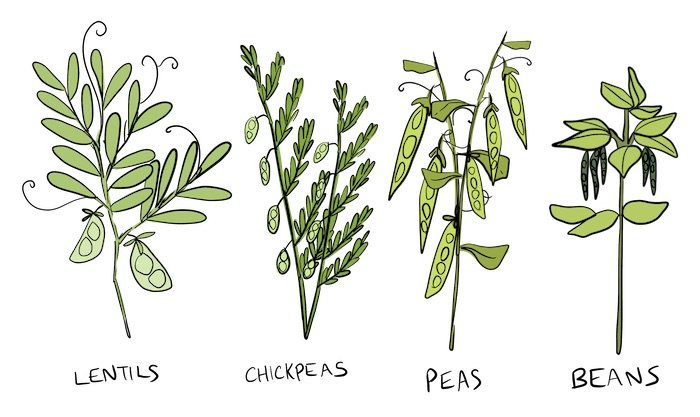 Lentils, chickpeas, peas, and beans are all pulse crops grown in Canada.

Chickpeas originated in the Middle East, which is a region of the world that still relies on this high-protein legume.

Chickpeas were first grown about 7,000 years ago in Egypt, Greece, and Rome. During the 16th century, Spanish and Portuguese explorers brought chickpeas to other regions of the world including parts of Mexico, the United States of America, Africa, Australia, New Zealand, Japan, and China. 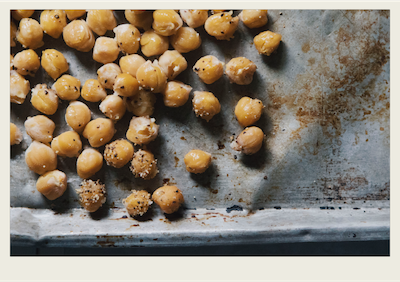 Chickpeas are popular around the world because they are an incredibly versatile ingredient to cook with. You can eat them canned, dried or roasted, hot or cold and they are inexpensive.
Flip Back 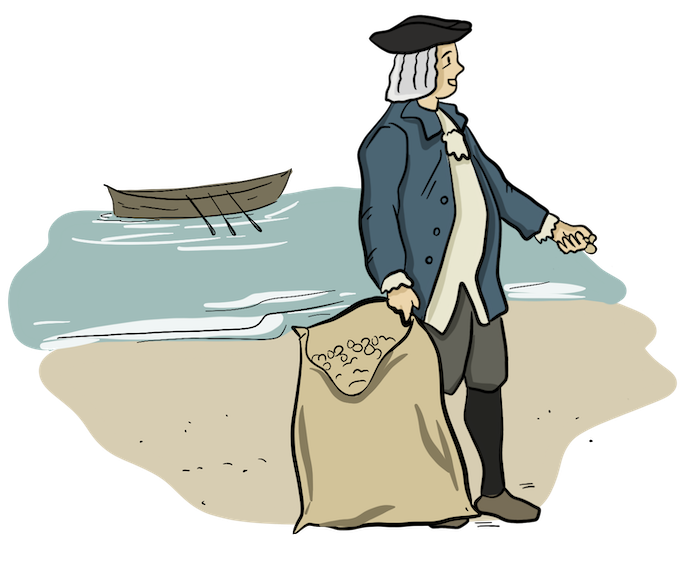 Explorers brought chickpeas over to Canada.

Chickpeas is a cool season plant. Seedlings are able to handle small amounts of frost. The plant has a long taproot that allows the plant to use water at a deeper depth than other pulse crops. Most chickpeas grown in Saskatchewan are grown in the brown and dark brown soil zones. 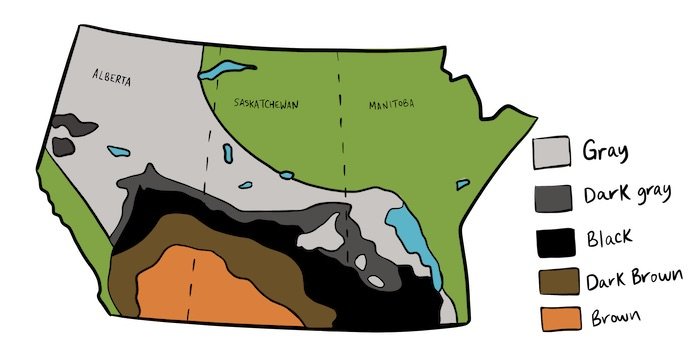 Growing chickpeas is good for soil that has lost a lot of its nutrients because chickpeas are able to take nitrogen from the air and convert it to plant food. Since chickpeas can do this, farmers do not need to add nitrogen fertilizer. 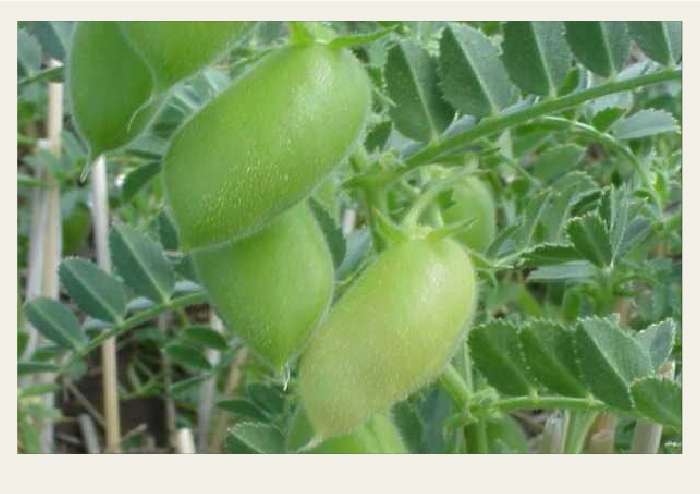 The chickpea is a cool season plant. Seedlings are able to handle small amounts of frost.

The chickpea plant will continue to flower until it goes through stress such as not having enough nutrients, a frost, or not having enough moisture. Throughout the summer, the crop can be sprayed if needed for weeds, insects, and diseases. 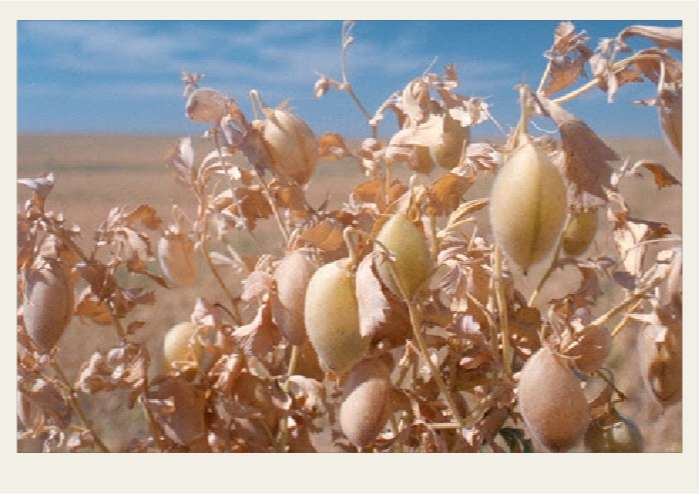 This chickpeas crop is ready for harvest.

The plant is ready for harvest when most of the plants are yellow, even though the tops may still be green. The plant can then be sprayed or swathed to ripen, and then combined.

Chickpeas are high in protein and fibre, but low in fat. The amount of protein they have makes them a great alternative to eating meat. 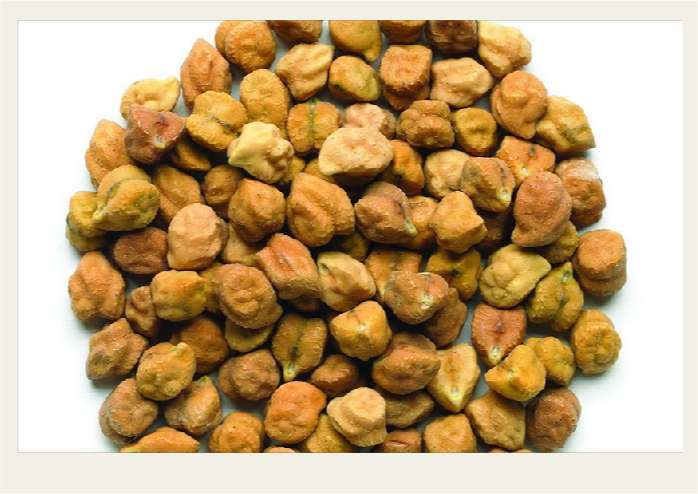 Chickpeas are a healthy choice for our bodies.

Chickpeas are used for a variety of delicious dishes.