The earliest settlements were built along rivers. Explorers, fur traders, and settlers used the rivers for transport. Canoes were common for travel on the waterways. Local people built ferries at busy river crossings.

Cart trails made by Red River carts crisscrossed the prairies. Another reason Red River carts were so popular is that they could float when the wheels were removed. When a trail came to a river the preferred place to cross was a ford, which is a place where water was shallow enough for people and animals to cross the river. It was dangerous to cross when the water was high (like after a heavy rainfall or in the spring when ice was breaking up). Their belongings would also get soaked if the water level was high. This group of people are in a motorboat on Pike Lake in 1925.

As large numbers of settlers and immigrants headed west, the ferries were a means for crossing rivers if the river could not be crossed at a shallow spot. Rafts made of logs were the first ferries. The ferries were large enough to transport a couple of Red River carts. Crossing by ferry took a lot of time and there was the danger of being swept away by strong currents or of the ferry tipping over. Later there were horse-powered ferries and cable ferries.

Rafts made of logs were the first ferries. 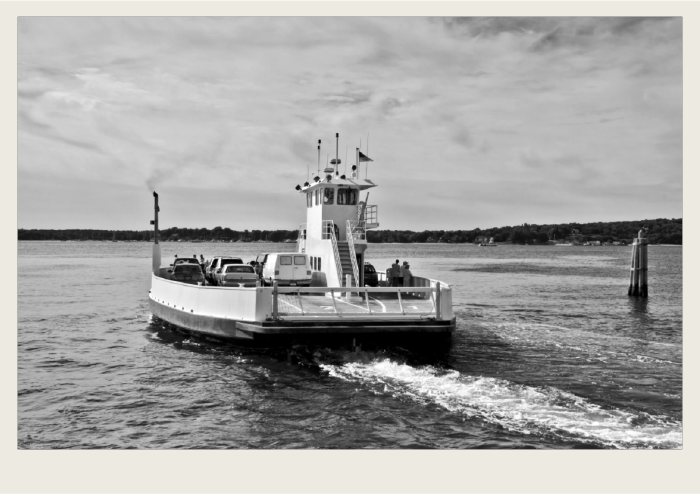 Ferries are still used today for vehicles to cross some of the rivers in Saskatchewan.

Flatboats were large barges made for hauling animals, wagons, and freight. They were steered by oars, poles, and sweeps (large oars). This type of boat came in all sizes depending on what it was used for. Small flatboats were for short trips and for navigating creeks and small rivers. Larger flatboats around 17 meters (55 feet) long and 5 meters (16 feet) wide were for longer trips and were used by farmers and traders to haul produce and goods. The flatboat was also used by settlers to transport animals, wagons, furniture, and their belongings. This is a family using a flatboat.

Large flatboats navigated big rivers transporting freight. They floated with the current and carried a crew and a pilot to steer past rocks, river banks, and rapids. The large sweeps helped to steer the boats. The crew also loaded and unloaded the cargo. Most of the flatboats were taken apart when they reached their destination. The lumber was used for building homes or local buildings.

Flatboats varied in how they looked because the group of people that traveled on the flatboat often built them and then took them apart when they got to their destination.

York boats transported freight for the Hudson’s Bay Company until steamers took over. Boats were about 12 metres (30-40 feet) with flat bottoms and pointed bow and stern. It required a crew of 6 or 8 men at least and sometimes even more men to operate the long oars. Sails were used when the wind conditions were right. The boats carried immigrants from York factory in northern Manitoba to the Red River Settlement. York boats transported freight for the Hudson’s Bay Company until steamers took over. 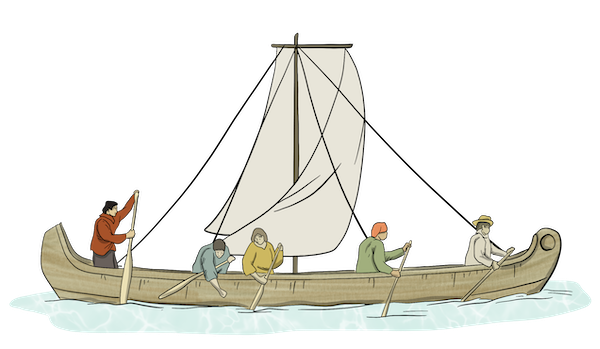 Steamboats, also called riverboats, navigated lakes and large rivers. Shallow water, sandbars, and ice damage in the spring were problems for steamboats. People and supplies were transported to settlements along rivers and lakes. Some steamboats had berths for sleeping. The sawmill boat has a load of lumber in August 1946. 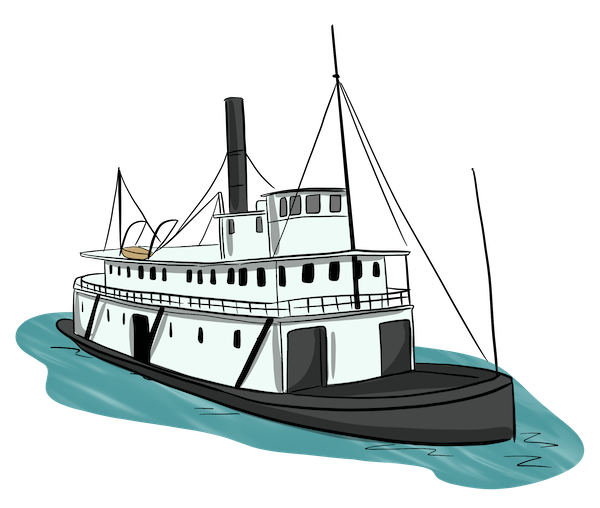 A river steamboat is not sturdy enough to safely take it on the ocean.

Canoes were used by Indigenous Peoples, fur traders, and explorers. Larger canoes hauled freight and supplies to trading posts located along rivers. Large canoes were almost eight meters in length and required five to seven paddlers. People settling near rivers and lakes also used canoes. They travelled on water to get supplies. This was faster than travelling on land on a rough winding trail. Explorers, fur traders, and settlers used the rivers for transport.