Bison, also called ‘buffalo,’ are native to North America and were once wild in Saskatchewan. There used to be about 60 million bison that lived in North America and were important to Indigenous people. When the Europeans came to North America, bison were hunted nearly to extinction, leaving less than 1,000 bison in the late 1800s. Today, bison numbers have recovered through help from the government and ranchers. In the 1980s, bison farming started to become popular again. Bison meat is healthy, nutritious, and tasty, making it a great choice for meat. 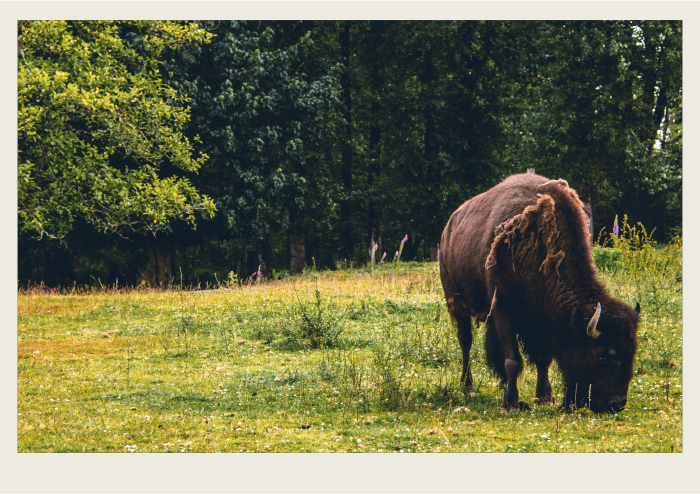 There were 60 million bison that once roamed North America. 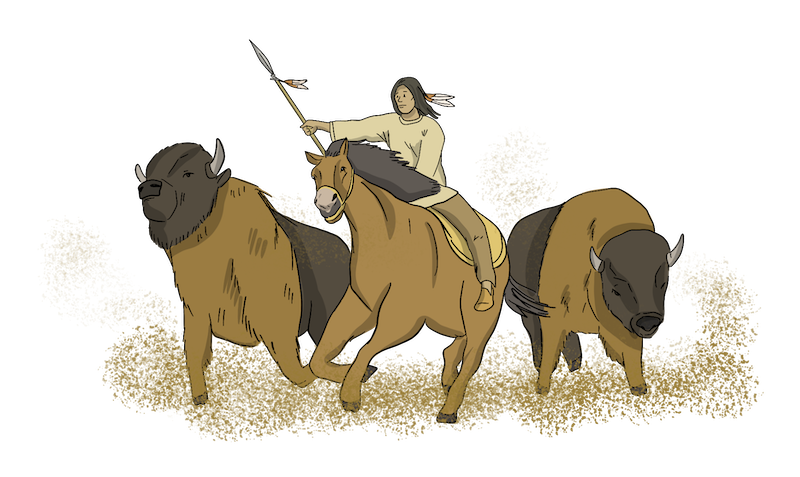 The bison were very important to the way of life for Indigenous people who used all of the parts of the buffalo after hunting it. 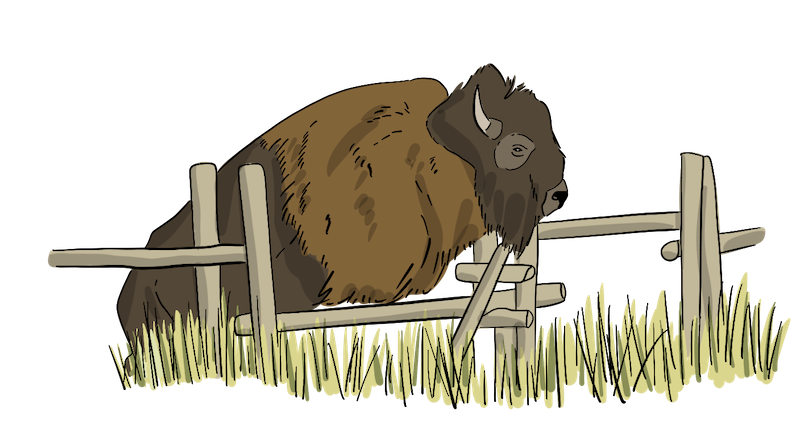 Buffalo can jump 6 feet high and will try to jump fences if they aren’t high enough. 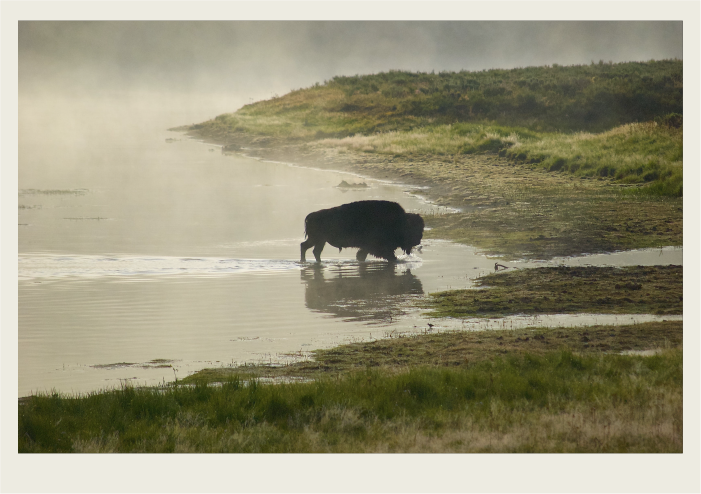 Bison may be big, but they are also extremely energetic and can spin around quickly, jump high fences, and swim very well.
Flip Back

In 2016, there were approximately 40,500 bison being raised on 300 bison farms. The average bison herd on each farm in Saskatchewan is 133 bison.

Just like cattle, chickens, and pigs, bison products are sold in many ways. Some bison farmers sell locally from their farms or small businesses. There are also some processing facilities that work with bison farmers and they purchase the bison directly from farmers. The bison are then transported to the processing facility where the meat is processed into many different cuts and products, and then packaged. The meat is then transported to grocery stores or retail stores where the end consumer will purchase the meat to cook it and eat it. 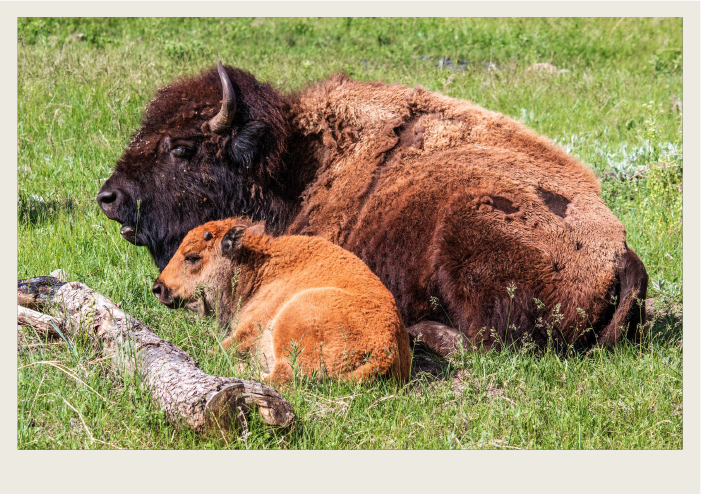 Flip
A cow is a female bison that has had a baby. They usually have their first calf at age three and then have a calf every year.
Flip Back 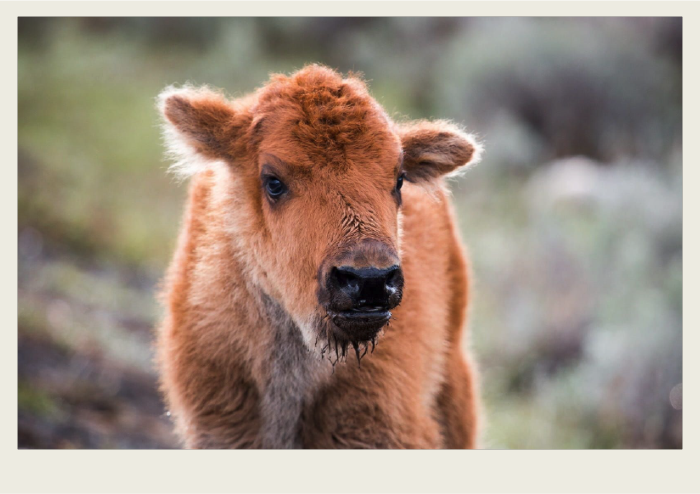 Flip
A calf is a baby bison.
Flip Back 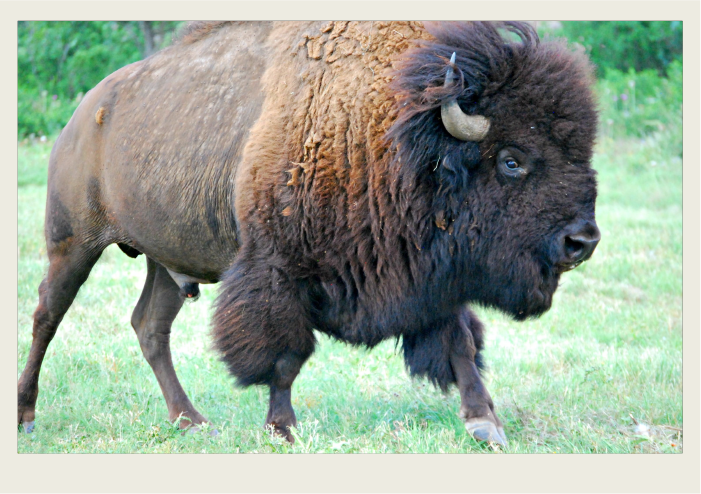 Flip
A bull is a male bison.
Flip Back

The Canadian Bison Association and the National Farm Animal Care Council developed a guideline to make sure animals are being treated properly. Animal health and well-being is important to bison farmers. The farmer makes sure they have enough food, water, and a clean environment. Vaccinations are given to bison to protect them from diseases. 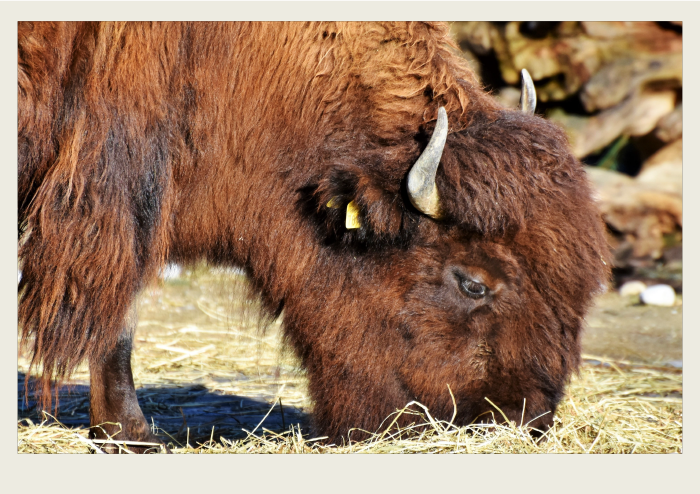 This buffalo is eating hay. 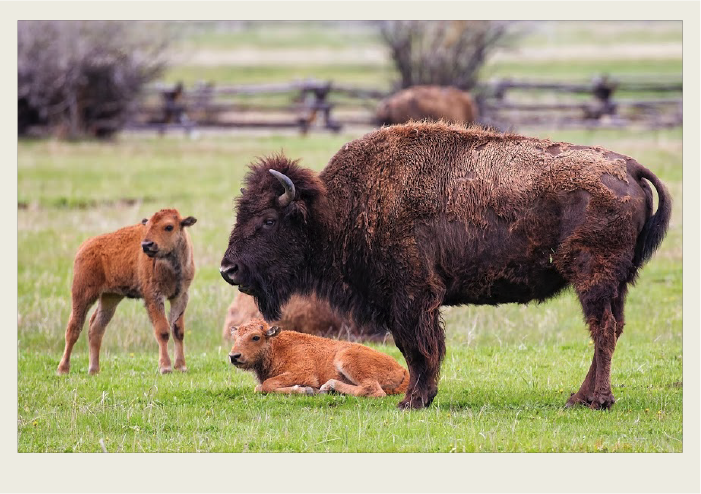 This buffalo and her two calves are in the pasture. 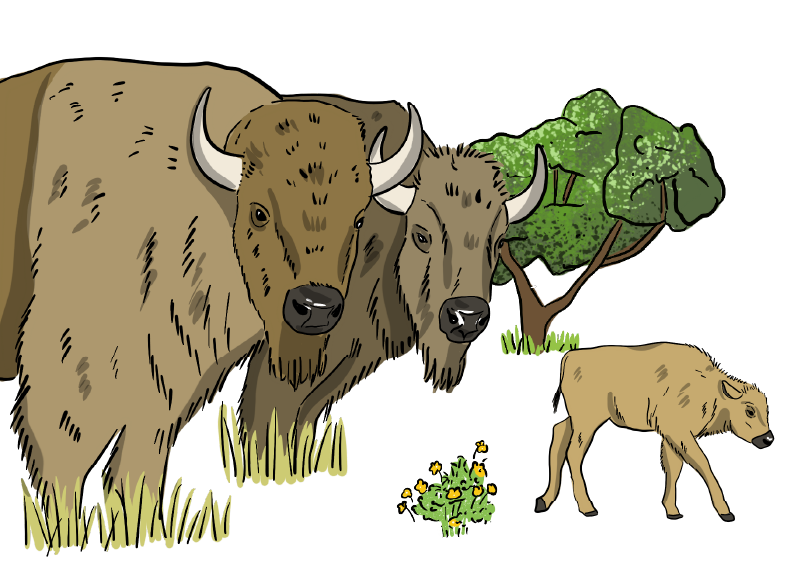 Bison are kept outdoors all year long. They have thick fur that helps to keep them warm. They eat grass and shrubs in the summer, and during the winter they find grass under the snow. 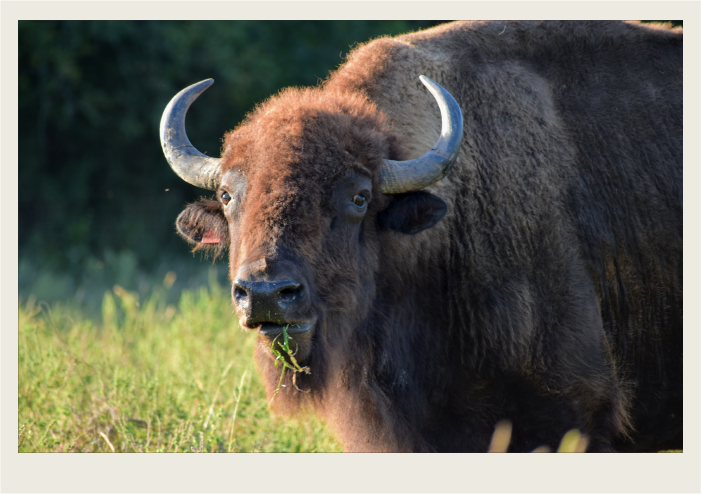 This buffalo is eating grass in the pasture. 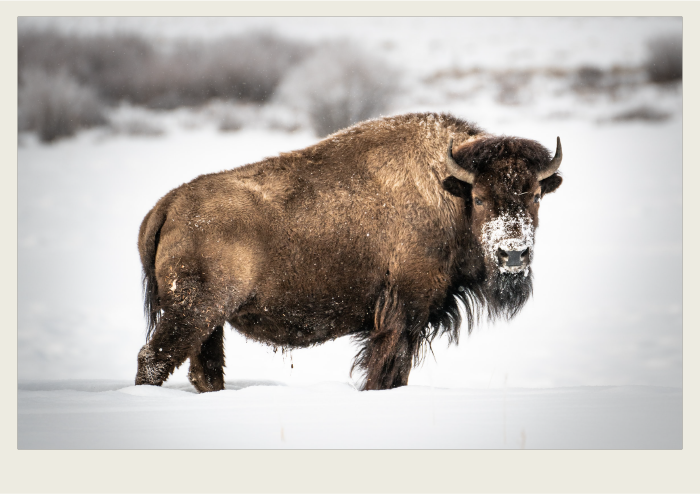 Buffalo have to dig through snow to find food in the winter.

Bison fences are high and important. If the pasture gets a lot of snow during the winter, the fence will be built higher than normal. The pens that the farmers use to feed the Bison in during the winter are built using wood and steel so they are strong enough to hold the bison in. 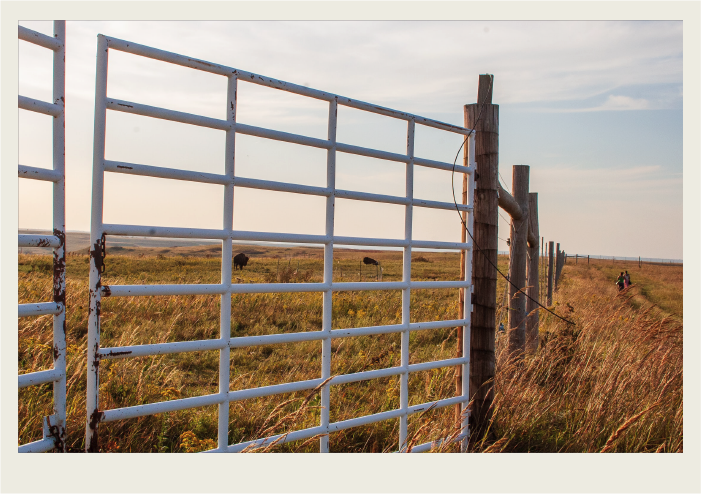 Buffalo are very large animals and can jump, so tall, heavy-duty fences are required to keep them in the pasture.

These bison farmers are talking about what life is like on a bison farm and in the bison industry in Saskatchewan.

There is not as much technology used on bison farms compared to other types of farms. Bison are naturally hardy. They are well adapted to the extremes of Saskatchewan weather and eat the food that nature produces on the Canadian Prairies. Bison handle the winter weather well. 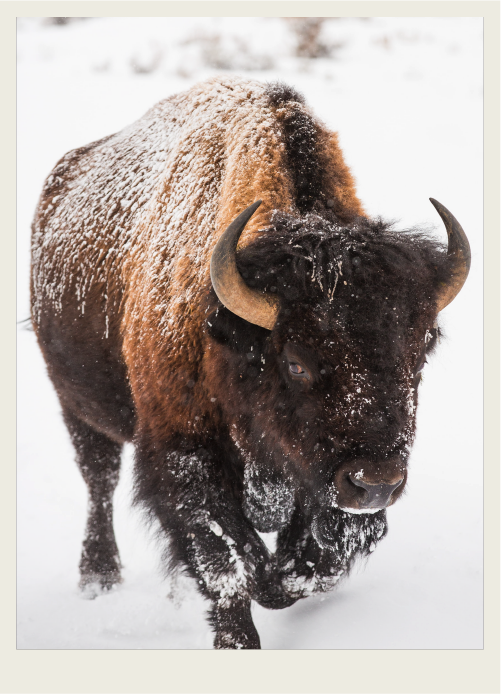 Bison adjust well to living outdoors – they are naturally hardy.

All bison must have an ear tag which contains a unique number to tell the bison apart and to keep track of each animal’s history. Farmers also keep track of when the bison was born, how many calves they may have had, and if they were sick and needed to be treated. This number is used for food safety and traceability if needed. Bison farms will use computers to keep track of information that is collected from the ear tags. 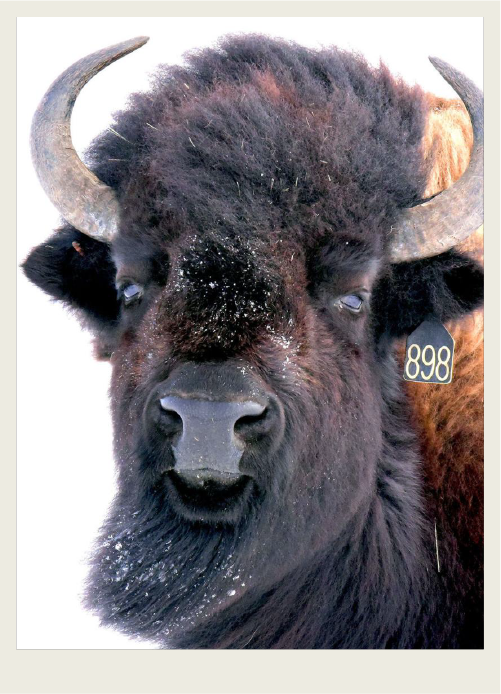 Bison Meat (Such as a Bison Burger)

The main use for bison is their meat, but there are other products that are byproducts of processing cows.

Bison is a healthy lean red meat. It has higher protein and iron than other red meats, such as beef. Bison meat is lower in calories, fat, and cholesterol than beef, pork, and skinless chicken meat. 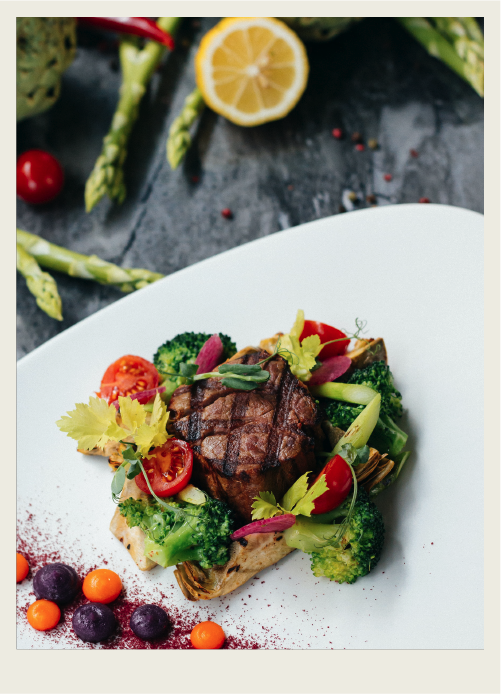 Buffalo meat is very lean and a healthy choice to eat.