Settler life was hard work, but living conditions became much worse in the 1930s. The Great Depression was a whole decade of people around the world suffering. There were financial hardships after the stock market crash. People were losing their jobs and could no longer feed their families. There hadn’t been proper rainfall for crops to grow. Topsoil blowing around was creating terrible dust blizzards. There was a grasshopper plague occurring and the grasshoppers were eating any plant that was managing to grow during the drought. Debt was adding up and families were being forced to sell their farms.

Farmers were not making enough money to earn a living for their families during the Great Depression.

Life in the 1930s was difficult for everyone, especially for farmers.

New farming techniques offered some relief from the blowing dust and the rain returned at the end of the 1930s. With the rain falling again and better farming practices in place, farmers began to grow successful crops again. The economy was slowly starting to recover.

Canada went to war again in 1939 in World War Two. This launched the country into action and created thousands of jobs, which helped the economy further recover. The Second World War created a large demand for food to feed the soldiers so Canadian farmers produced record amounts of food thanks to their new practices. 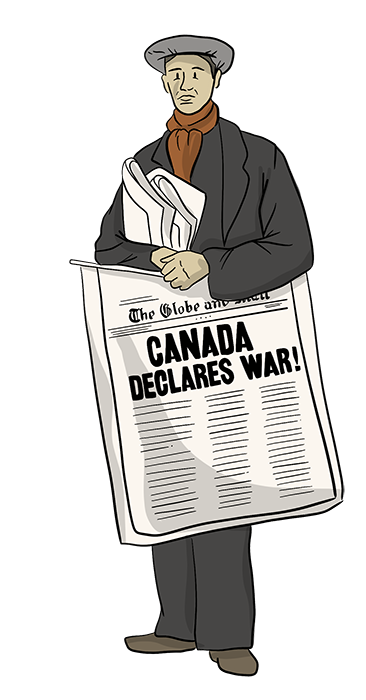 Canada declaring war was one of the factors that put the economy into recovery.