The very first Chinese immigrants to move from China to Canada immigrated in 1788. There were 50 people that moved here to help build a trading post to start trade between British Columbia and China. 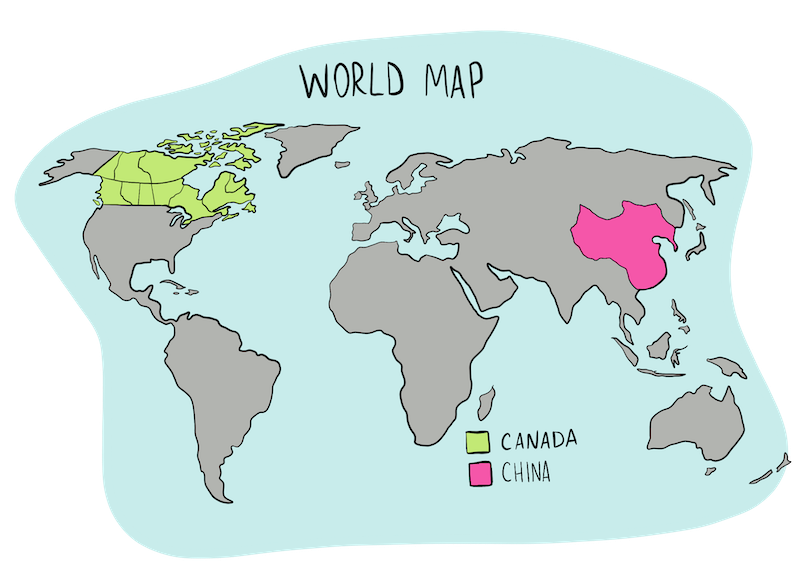 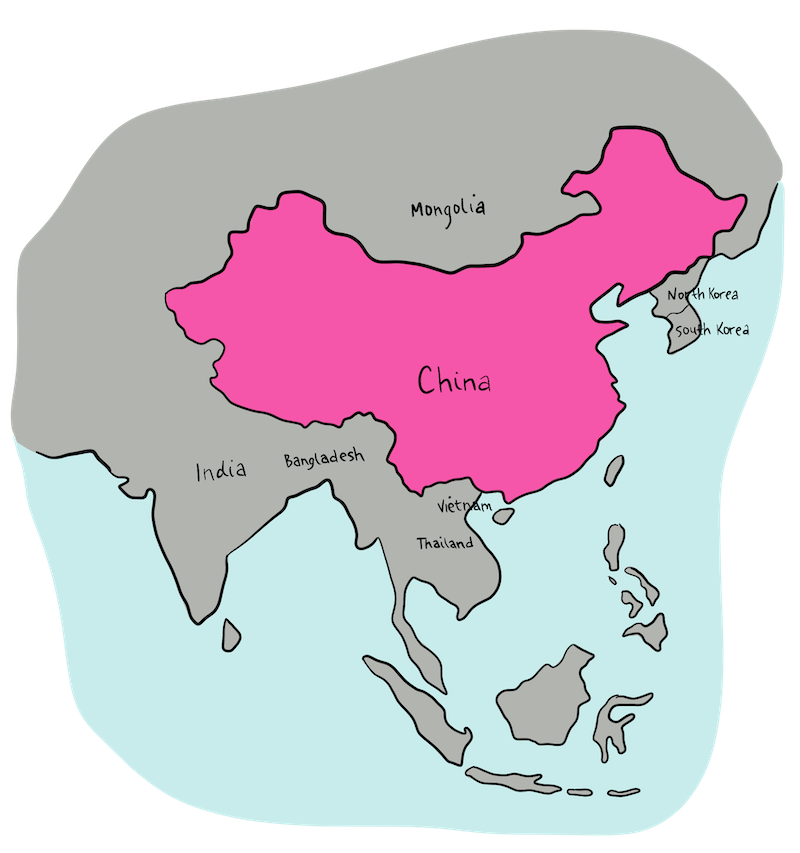 The country of China and the surrounding countries.

During the 1800s, China was experiencing poor living conditions, war, and rebellion. There was a lot of violence in China and the Chinese people were no longer safe in their home country. Their government was not allowing them to make decisions about their traditions and beliefs. Many Chinese were fleeing their country looking for safety. 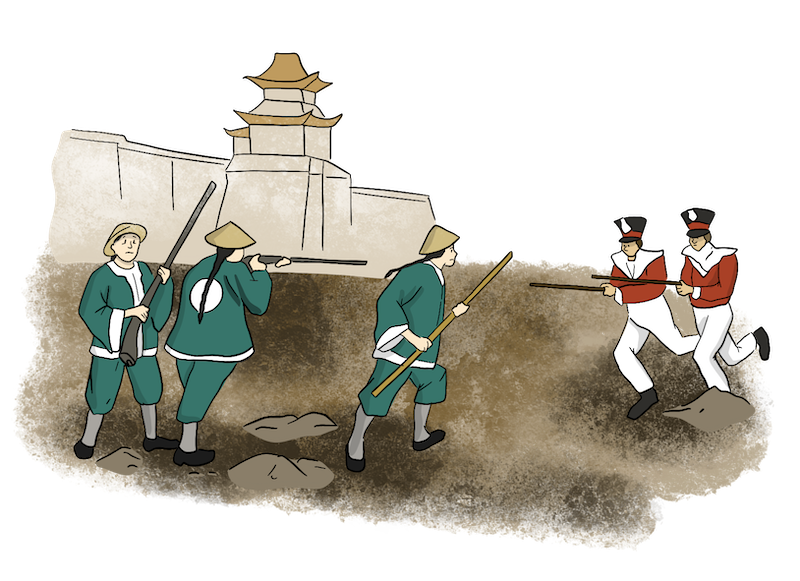 There was a lot of war, rebellion, and violence in China in the 1800s and Chinese were no longer safe.

Chinese immigrants moved to Canada in the early 1880s to work on the western section of the Canadian Pacific Railway in British Columbia. It was estimated that 15,000 Chinese labourers worked on this section of the railway. These immigrants were very important in completing the coast-to-coast railway. However, they worked under terrible working conditions for little pay and many people died tragically on the job. 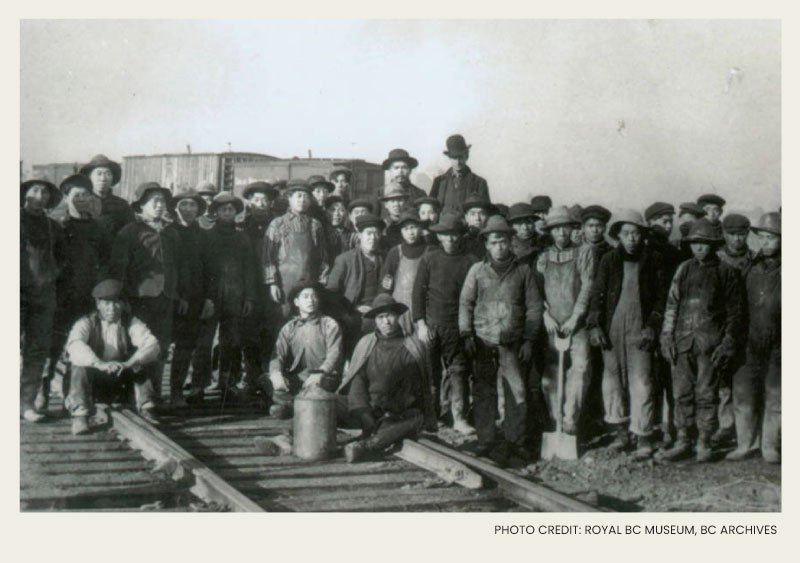 A group of Chinese workers that are building the railroad. 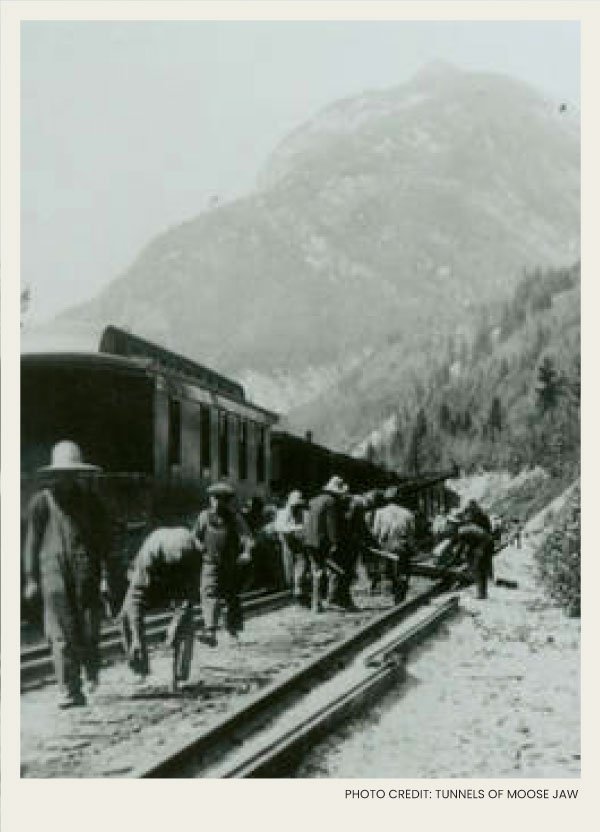 Many of the first Chinese immigrants worked on the Canadian Pacific Railway in British Columbia under shamefully terrible working conditions.

Many Chinese lives were lost due to awful working conditions on the railway.

Many of the employers gave the heavy labour jobs to Chinese immigrants because they would work for lower pay and were good workers. Some Canadians wrongly believed there were fewer jobs available for them and that the standard of living was being lowered because the Chinese Immigrants were willing to work for less. Chinese immigrants were earning 50% less than what a settled Canadian would earn for the same position. 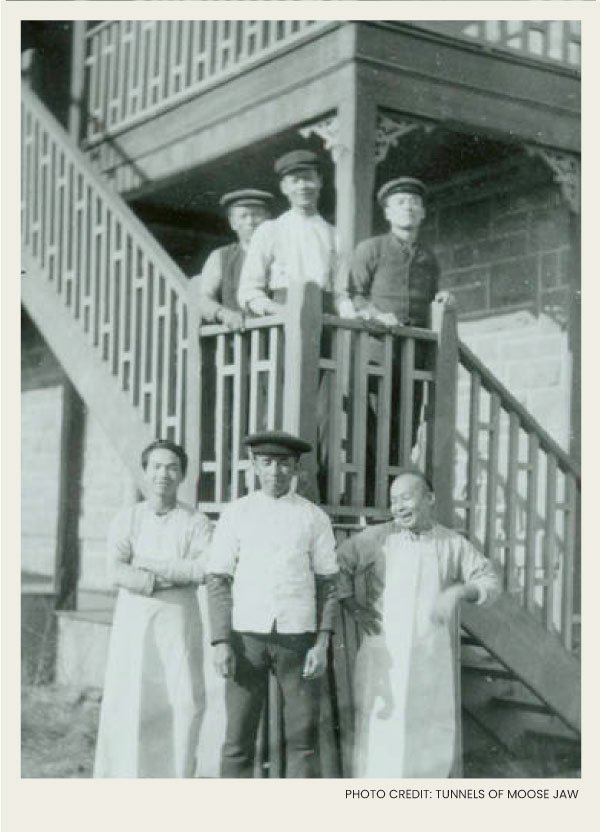 Chinese immigrants in front of their apartment.

The Chinese immigrants earned very little money in Canada and they had to send most of their earnings back to China to support their family. Because of this, they did not have much money left over to survive and to combat this, they would live in overcrowded living conditions. Some Canadians feared these overcrowded living conditions would spread diseases in the community. 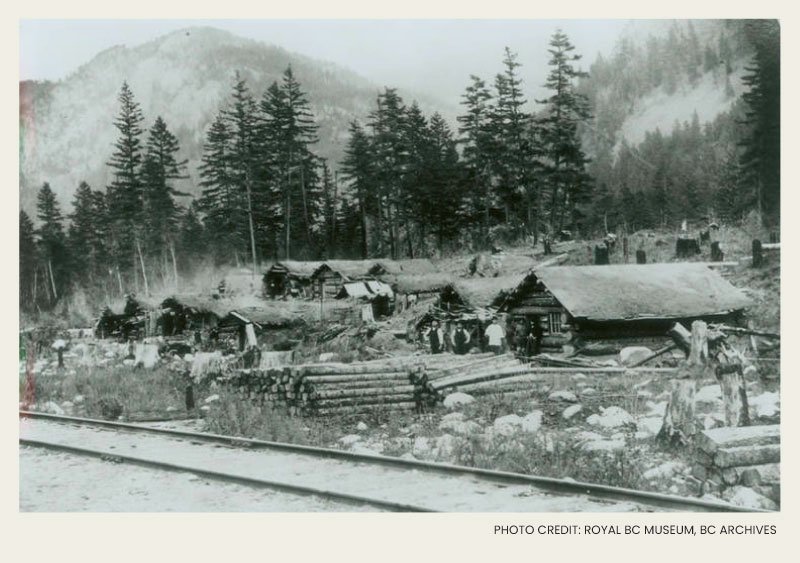 This photo shows a Chinese Camp where some Chinese workers lived while they worked on the railway. 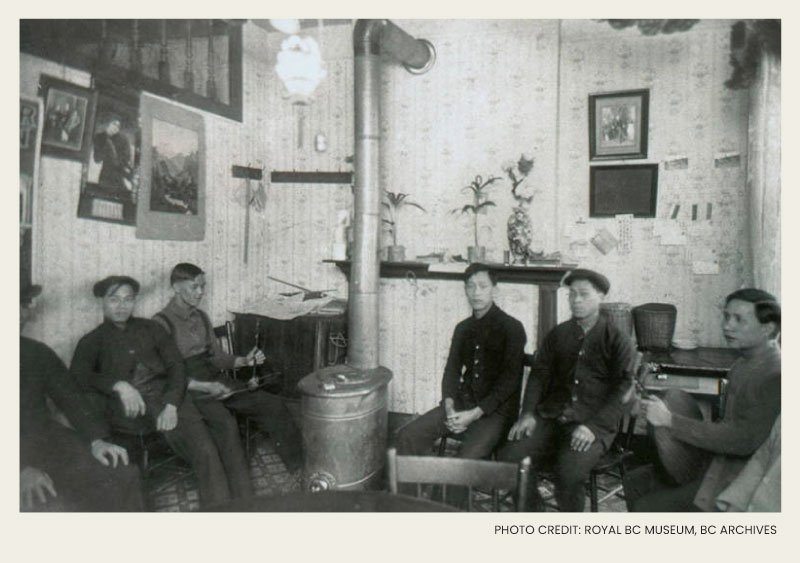 The cramped living conditions of Chinese people living in Canada.

This image looks like one of the Chinese living quarters in Victoria, BC in 1886.

Tension was rising amongst White people who were concerned that Chinese people may be spreading diseases within our communities, and they were lowering the standard of living by working for such low wages. The Canadian government started charging the Chinese a $50 head tax per person to enter Canada. Despite the labour for the railway and lives lost because of it, Canada discriminated against more Chinese people by making it difficult for them to immigrate here. By 1900, this tax was raised to $100 per person and by 1903, the tax was raised again to $500 per person. This unfairly limited the Chinese from coming to Canada. Due to the head tax being very expensive for Chinese immigrants, they often could not afford to bring their wives, children, or parents to Canada. Therefore, Chinese men typically came alone. In 1931, there were about 47,000 Chinese people living in Canada and only about 4,000 were women. 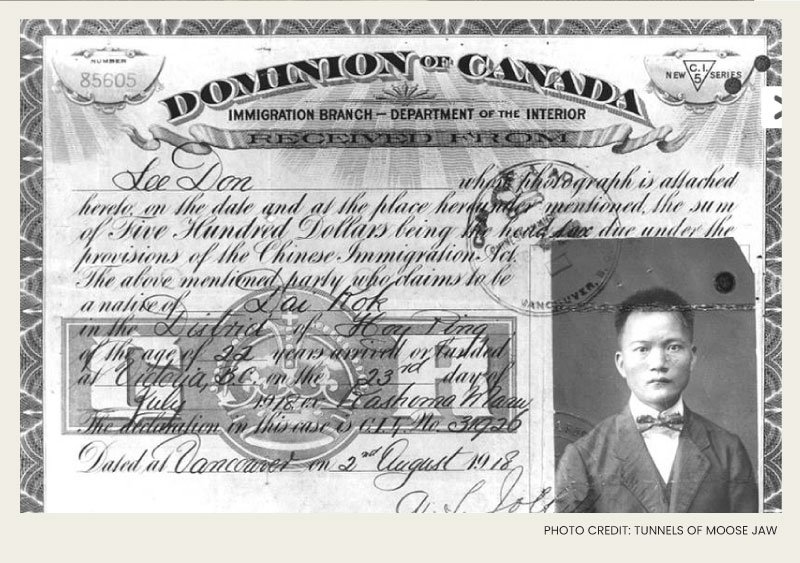 This is a certificate that acted as proof that a head tax had been paid for entering Canada. 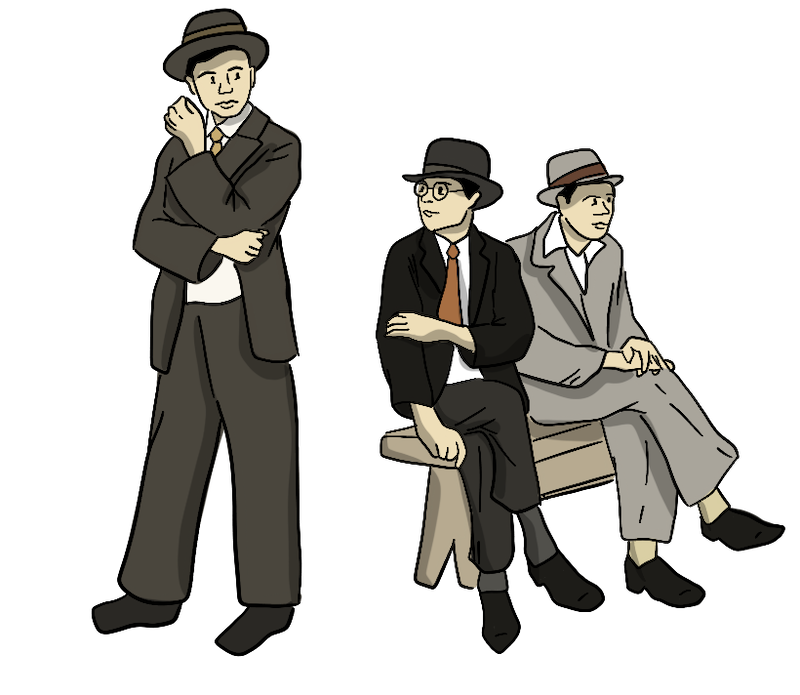 Due to the head tax being expensive for Chinese families, many Chinese men came to Canada alone until they could afford to bring their families.

Chinese people had to prove they paid their head tax by showing their certificate from the government if they were questioned by police.

If Chinese labourers were injured while working on the railway, some would settle in the nearest small town in order to receive medical attention. However, they still needed to make money, so many chose to start a small restaurant in the town that they settled in. This is why many small towns along the railway have a Chinese restaurant in them. 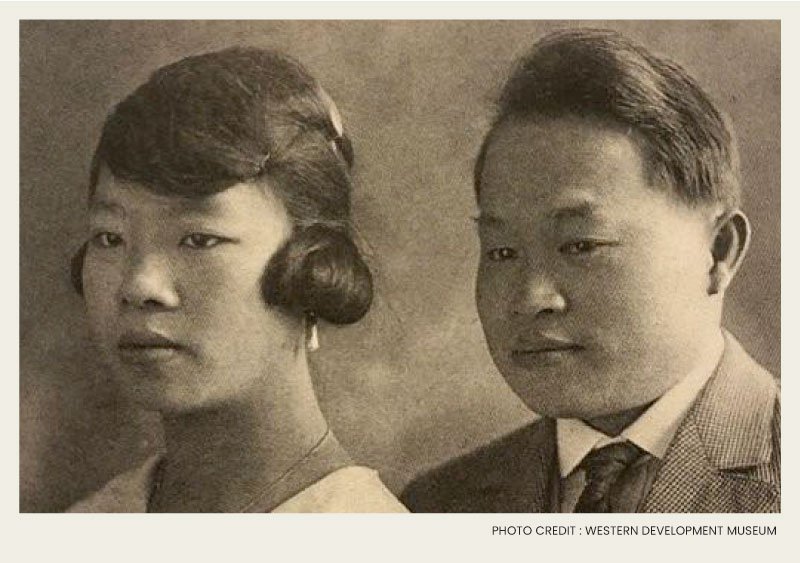 Portrait of Jennie and Charley Howe, owners of the Star Café in Marcelin, Saskatchewan.

Most of the Chinese immigrants coming to Canada after the railway was built chose to settle in large cities. They started settling in the same areas of cities as other Chinese people and created what is known as ‘Chinatowns’ within many larger cities. Chinatowns became vibrant areas for Chinese immigrants to socialize and speak their home language with each other, buy their groceries, go to restaurants, listen to music, and make any of their other purchases. Chinese immigrants also felt a little safer from the terrible racism that they were experiencing in Canada while they were in their Chinatowns. 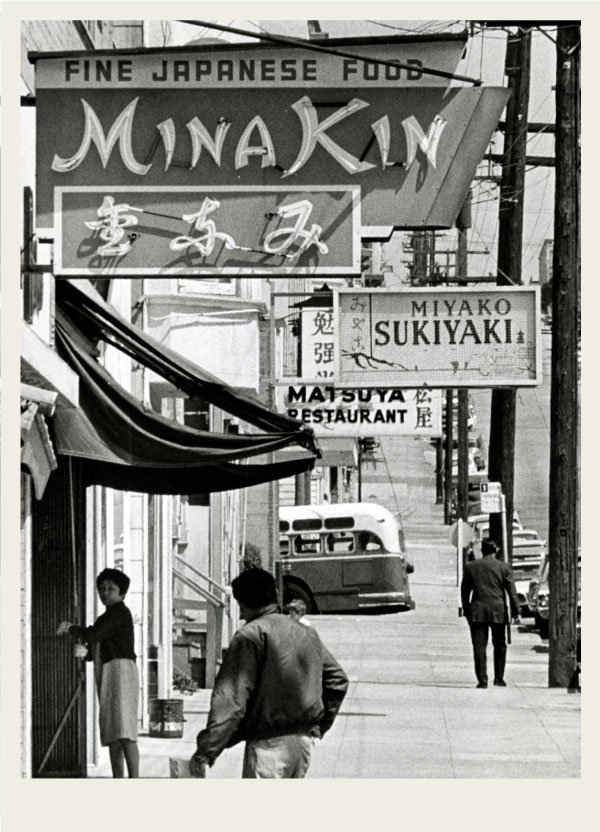 Chinese people settled in the same areas of larger cities to make what became known as ‘Chinatowns’, which were areas where Chinese people felt safer.

In 1923, the Canadian government changed the law so that Chinese people could not enter Canada at all and this law was enforced until 1947. The only exceptions to this law were suppliers, diplomats, and foreign students. It was not until 1947 that Chinese immigrants that were living in Canada were finally granted official citizenship. 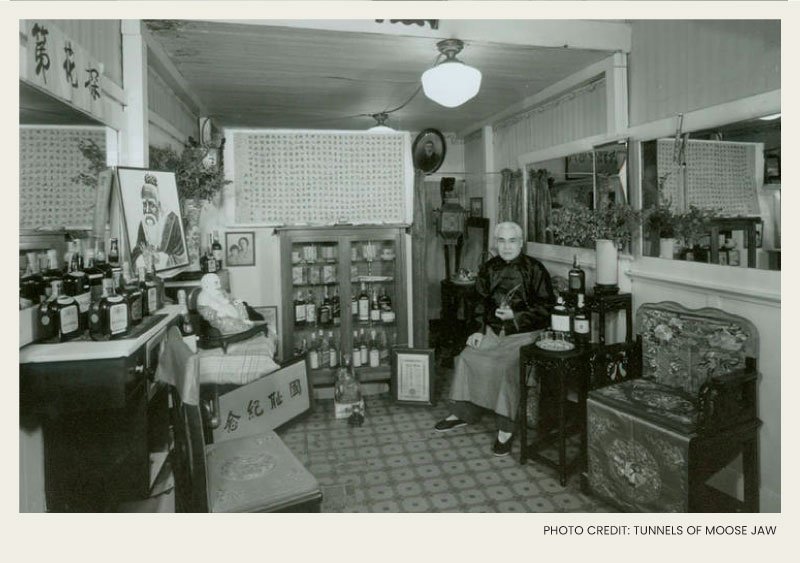 This is the inside of a Chinese business in Chinatown.

Since 1947, Chinese families have been able to come to Canada as a family. Many of these Chinese immigrants are well educated, have financial resources to live a high standard of living in Canada, and have professional skills. Chinese people often still settle in larger cities, with most choosing Vancouver or Toronto as their new home. 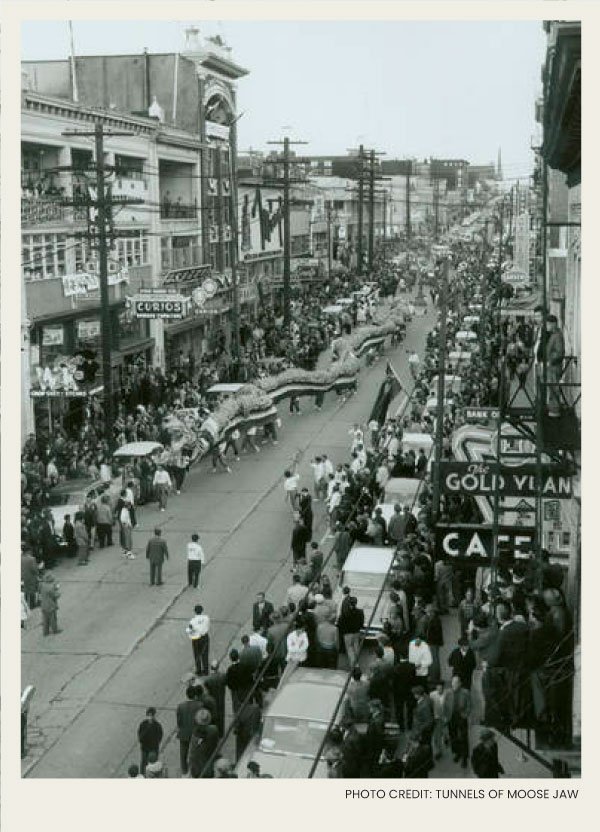 A parade is being held in a Chinatown in the 1920s. 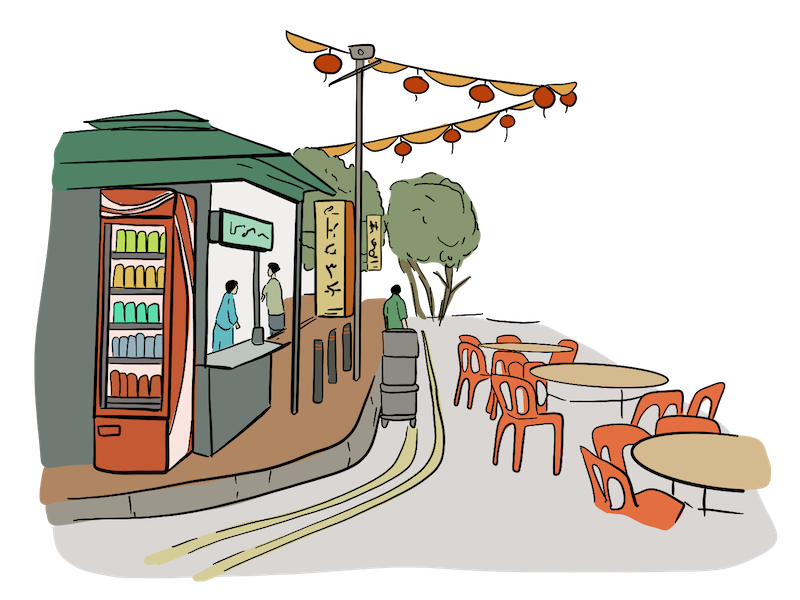 Chinatowns become a little city within a city for Chinese people to feel more at home.

Chinese immigrants have contributed greatly to Canada’s society. They have been successful in many different careers such as dancing, sports, politics, film, music, engineers, doctors, business owners, teachers, and scientists.

Chinese immigrants have contributed greatly to Canada’s society in many careers, including scientists.

Yucho Chow has become a famous photographer from the early 1900s for his photos of minority groups.

The Chinese were unfairly charged a head tax to immigrate to Canada.

The earliest Japanese immigrants arrived in Canada in the late 1870s and faced the same terrible working conditions and racism that Chinese immigrants faced. This video shows what life was like for Asians that came to Canada to work.